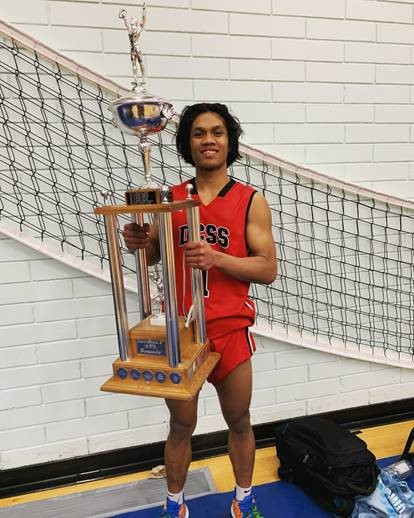 Grade 10 student, Jethro Cardines has enjoyed sports for as long as he can remember. He credits his father’s “never ending support and teaching” for allowing his desire for basketball to flourish.  Jethro’s enthusiasm is also shared with his brother, and the father/son trio relish in every opportunity to get some family time in playing a game of basketball or badminton. Another inspiration of Cardines’ is 21-year-old basketball player, Trae Young.

“He is one of my favourite players,” he says.

Cardines says sports adds a passion and motivation to his life.

“When I’m in a game, I love the feeling of adrenaline running through my body, giving me the sensation that I can do anything.”

It’s not just the physical aspect of sports that draws him in and keeps him there. Working on ways to better himself every day is a big part of the challenge and enjoyment.

Recently being recognized as player of the game during the Provincial Championships, plus MVP & 1st All-Star at the 2020 North Central Zone Championships drives Cardines forward. He is first to acknowledge all the people he has supporting him.

“It makes me feel good to have so many people supporting me doing what I love.”

Playing sports doesn’t come without some set-backs though. Cardines told us he would have loved to have spent all of this year focusing on active practice, however an ankle injury in the first game of the season changed that. Being forced to take time off was tough, but he understands the benefits of giving the body time to heal.

“Recovery time takes away from time I could be using to improve and learn, but I also understand that it is important to heal so I can continue to play.” And play he did, ready to go by the next tournament.

When asked the standard question, “Did anything unusual happen this year?” Cardines will remember being named Athlete of the Month in grade 10 and of course, “Our club’s season being cancelled due to COVID-19.”   The season may be cancelled but Cardines is appreciative he has his father and brother to play his favourite sport with!

Congratulations Jethro, we look forward to seeing you back on the court soon.